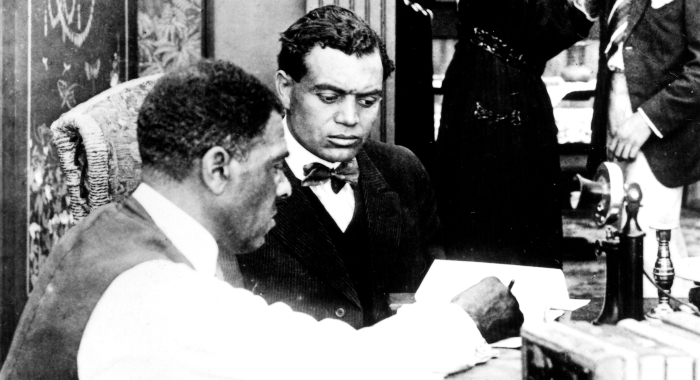 In the early 1900s the Black community was growing economically into middle class wealth. There was a rise in art and consciousness. However, their needs as consumers were intentionally being left out and ignored.

In the entertainment and media world, it was no different, not many films (if any) catered to Black audiences or portrayed Black characters with high intellect.

African American actor Noble Johnson and his brother George Johnson saw an opportunity, and became the pioneering production company that made movies to reflect the growth within the collective community. It was the first taste of undeniable talent and Black excellence.

The Lincoln Motion Picture Company was founded in the year 1915. The firm is acknowledged as the first to cater a niche market of “race films,”  identifying motion pictures that had an all black cast. At first they were located in Omaha, Nebraska, but then relocated to 1121 Central Ave, in Los Angeles, California.

Unfortunately, the glory of the production company didn’t last. With less than 10 years of active work, they were able to produce five movies that included: The Realization of a Negros Ambition, The Law of Nature, Troop of Community K, A Man’s Duty, and By Right of Birth. The Lincoln Production Company was the first to create serious dramatic films.

This was the first time entertainment was created with a Black audience in mind, they were thought of and were served a product that was to their liking, and the Black community became loyal to Lincoln Productions.

The Johnson Brothers broke through boundaries that were set up in a time of division. The Lincoln Motion Picture Company paved the way to a new genre of film that represented Black people as talented, smart, and creative.

‘Judas and The Black Messiah’ Review: Exploring the Intricate Parts of the Black Panther Movement